Hay is made just once a year usually June or July and then stored for the rest of the year, one of the key factors to quality and incredibly important is the weather, when its growing and when it is made, these two major factors dictate the quality every year whether its good and plentiful or not so good and in short supply. So in some years this can make the quality of hay we demand  pretty hard to find, you probably know this already as hay available in the shops can be hit and miss, lots of harmful dust usually chopped up and questionable quality.
Our business provides the total opposite, Best high quality hay with the choice of different textures, full length and not chopped and in addition to this our unique dust removal process eliminates practically all the harmful and damaging air borne dust.
There are different types too which you can mix and match for a variety or just find one type that may be preferred over another.
(Click on the images below to see videos)
We try to keep as organic as we can,this means we use no chemical sprays to control weeds so occasionally the odd dock or cow parsley may get though our screening system.

This has come a long way!

Imported and grown in the states of Oregon and Washington in America, where their hot summers make it an ideal growing climate for this hay.
Its consistent top quality makes it recoginised as one of the best hays you can buy in the world.

Its hard to find anything else that comes up to this standard.
Click on the image to see a video of current stock.

Softer hay comes from longer established meadows that may have not been ploughed and reseeded for decades, here more native less vigorous grass’s will grow such as cocksfoot, timothy,sweet vernal along with lots of herbage too, may not have the best feed value but certainly has the “wow factor” when it comes to smell!
Click on the image to see what this years looks like. 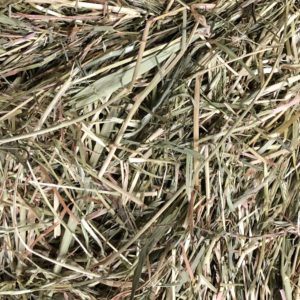 Stalky Hay is from fields, re-seeded maybe up to 4, 5,6 years old, the hay is reasonably coarse.

As its relativley young grass it has thicker stems and more feed value, if its not re-seeded it will slowly be taken over by the more traditinal meadow grasses and gradually revert back to a softer hay.

Current Stalky is a mix of some of last year’s coarse yellow seed hay and some greener new season hay, it can be wrongly mistaken for straw.

Click on the image to see a video of current stock. 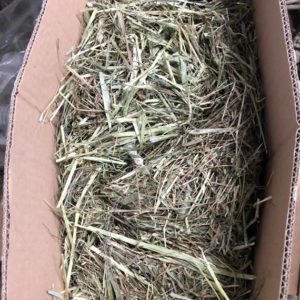 We are trying a mix of two hays for something different to try.

Along with English  Meadow Hay we have mixed in some of our American grown Timothy Hay, it should  make things a bit more interesting for your animals giving them the best of both and encourage them to pick through and choose their favourite while able to munch through a choice of stems. We have approximately mixed 60% Meadow and 40% Timothy.

Available in Box Combinations to start.

Unlike hay this is replanted every year. The straw is the stem that the barley  grain grows on, its harvested with a large combine that thrashes the grain from the straw. The grain goes for animal feed or brewing while the straw is a good source of fibre for animal feed and can also be used as bedding.

Not to be confused with wheat straw which is used for bedding.

Dust is a problem with all hay and unless it has been subject to an additional and extra process it’s extremely likely that there will still be a good percentage of dust in the bale. (Click on the images below to show the videos)

Claims of hay that has been baled up in the field as normal being dust free are misleading and hay that has been through any dust removal process is extremely hard to source and the efficiency of the process may also come into question and it seems acceptable but misleading to say something is dust extracted even though it may have only removed a very small proportion. Airborne dust, that’s the very fine particles you may only probably see in a shaft of sunlight are the most harmful, the combination of this along with an enclosed space are ultimately going to have serious health issues and consequences not only for the animal but also those looking after them. Our purpose made system is extremely efficient at removing just about all this airborne dust, greatly reducing the risk of any respiratory problems arising from this often over looked hazard.

Once thoroughly cleaned we bale the hay up only a couple of days before dispatch using woven poly-propylene sacks and cardboard boxes, these are recyclable and most practical packaging we have found.

Hays a natural product and it varies all the time it’s never exactly the same, sometimes it keeps better than other and so we encourage customers not to buy too much at a time perhaps enough for a month’s supply.